When Jane Couch successfully took on the boxing establishment in 1998 and became the first ever licensed British female boxer, you would have thought it would kick start a bright new future for women’s boxing.

Sadly that didn’t quite happen, but after the recent Olympic success of the likes of Katie Taylor and Nicola Adams, things are slowly beginning to change.

Taylor and Adams made the switch to the professional game, Natasha Jonas did so as well, and the likes of Terri Harper, Shannon Courtenay, Chantelle Cameron and Savannah Marshall are some of the new talent which will hopefully further raise the profile of women’s boxing.

Shannon Bowe will hope she will boost those numbers further. Bowe is awaiting to see if she will be granted a licence to box as a professional.

If Bowe gets the green light, she will be trained by Pete Shepperson and will be managed by Steve Wraith. Bowe would also be the first-ever female professional boxer to come from the market town of Darlington.

I had the immense pleasure of speaking to Bowe, which incidentally was her very first interview. Bowe got into boxing because she was being bullied in school.

“I was being bullied when I first went to school, and I started boxing to improve my self-confidence and learn some self-defence.”

Bowe is only 20, and with myself being a little older shall I say, I was surprised when she told me how widespread bullying was in school, a clear sign of the different times we live in today. Bowe works as a personal trainer and also teaches Thai boxing as well as the more traditional boxing.

“I teach a lot of kids starting from the age of 5, and many started boxing for the same reason I did, because of bullying and to boost their confidence, bullying is a lot more common than a lot of people think, more than half the class come because they have been bullied. When they come into the gym, I want them to get to the same place where I am now.”

It might seem strange to some, but the more fighters I speak to, the narrative I get off most of them is how much they enjoy the sport, Bowe is no different.

“I enjoy the different styles of the sport, the different angles you need, the footwork and of course the competitiveness of it. People think it is just about punching but it’s not, there is far more to it.”

Bowe seems to come from a supportive family, who probably go above the call of duty to show their support.

“They come to the fights, and they also do the dieting with me when I have a fight coming up.” 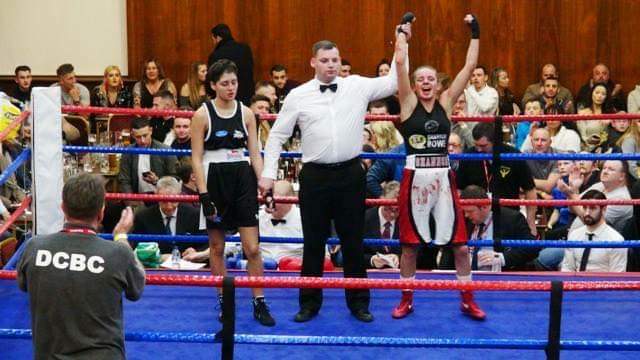 A short amateur career of only 9 fights is what Bowe will bring to the professional ranks. Her record of 5-4 (3) might seem a little uninspiring, but Bowe explained that most of her opponents were a lot heavier than her, and the record probably doesn’t tell the full story.

“I was always let down in the amateurs, I’d turn up for fights, my opponents either wouldn’t turn up, or turn up heavy, so a lot of the time I fought heavier girls. I would travel for fights and people didn’t show, so I didn’t end up fighting and I started to get disheartened which is why I decided to turn pro.”

Turning pro comes at a cost, having to find the money for medicals and the proper nutrition amongst the other costs that come with the sport and Bowe has been lucky enough to secure the sponsorship needed to cover her costs to allow her to turn pro so quickly.

Bowe is waiting for her hearing to determine if she is given a licence and is hoping to be boxing as early as March if everything goes to plan with her hearing and her medical.

There still seems to be that stigma associated with women’s boxing, something which Bowe seems intent on addressing.

“I want to fight often, get on the big shows, win a title and show that boxing isn’t just for men, and gradually help get more girls into the sport.”

Katie Taylor has played her part in the recent resurgence and has inspired so many, and Bowe is no different.

“The person that has helped me so much and inspired me is Katie Taylor, by watching her documentary and seeing how she has changed her life through boxing.”

To close the interview I asked Bowe what one thing she would change in boxing, it is a  question I always ask, and not once have I had the same answer, this time is no different.

“To relieve the stress of the boxers when it comes to selling tickets for the fights, you can have a really talented boxer but if they don’t sell enough tickets they don’t fight. It should be more about the boxer rather than how many tickets they can sell.”