Covid-19 has stopped virtually everything in life. It has not only stopped sport but for the elite athletes, the quarantine restrictions have severely restricted what they can do. The normal regular gym routine has been replaced by simply making do and doing what you can.

The unbeaten bantamweight prospect from New South Wales, Ebanie Bridges has adapted to her new way of training:

“To be honest as a boxer the only thing you are restricted from is punching people. There are so many things you can do by yourself. Drills, skipping, work on your fitness, strength and conditioning, I’ve got a bag set up now. I didn’t have the bag at first so I was doing a lot of weighted shadow boxing at first, as long as I have something to punch I am ok.”

Boxing has recently started again in America, with Top Rank doing a series of events and in the UK we look like seeing shows up and running again in July. Australia could potentially start soon after, but with the sport still struggling to grow in Australia, at least in comparison to elsewhere in the world, the lack of a paying crowd is more problematic:

“They are saying here in Australia boxing will start again around August and September but that will be the really big fights. There will be a very limited amount of fights because there is no money in it, we can’t do like what Eddie Hearn or Bob Arum are doing. We have only just started getting boxing on the TV, so I am not getting my hopes up too much, but I’m training to be fight fit as best as I can. I can’t spar until the gyms reopen, I can’t go into a fight without doing any sparring.”

Australia hasn’t suffered the effects of the ongoing pandemic in the same way the likes of the UK and America have. The death rates and cases of confirmed cases are much lower. Ebanie, a maths teacher, has been working all the way through the crisis. First with restricted class sizes, and now steadily getting back to the normal, she has had to continue working, with the risk of catching the virus very much there. But a return to the gym and sparring must still be a worry for her?

“A little bit, but we have only just reached 100 deaths in Australia, so it is not that big over here, so I am not super worried too be honest. I go to school every day teaching kids and I have been doing that more or less every day since it started. So I have more chance of catching it off the kids at school than I do at the gym with a few people.”

Ebanie has been fighting in some shape or form for much of her 33 years, but boxing didn’t find her until quite recently:

“I did bodybuilding for around 8 years, but from the age of 5, I have been into martial arts when I did karate. I always used to watch action movies when I was a little girl, I have always been into fighting. I got my black belt in karate, then when I went to high school I wanted to do something a little more aggressive so I started doing kickboxing and Muay Thai. This was around 17 years ago and boxing at that time wasn’t big for women, kickboxing was more a girls sport.

“I had a boyfriend who was really into boxing so I got into boxing more through him when I was in my teens. I was doing a lot of Kickboxing and Muay Thai training but it was illegal for women to fight in any combat sport in most parts of Australia at that time. I thought what’s the point of doing all this training if I can’t fight anyone so then I got into bodybuilding, at least I could compete in that.

“But then two or three years into my bodybuilding career it became legal for women to fight in Australia but I didn’t want to change my path at that time so I stuck at the bodybuilding and did it for as long as I felt I needed to. I was very successful at it and achieved what I wanted to achieve. I got to the point where I had nothing more to prove and I wanted to do something different. So I thought what do I like, and I liked punching the crap out of people and hitting things. But I didn’t think that much about boxing at first, but I went to a boxing gym to improve my footwork for my kickboxing. But then I thought this is way better, and I loved it and never kicked anything again.”

Adjusting to her new life and letting go of her previous one wasn’t easy:

“As a bodybuilder, I didn’t run across the street for about 10 years, because if you run you lose muscle. I also smoked a packet of cigarettes a day when I was bodybuilding, I smoked since I was 14. But then when I stopped bodybuilding and started boxing I had to stop all that. I used to have nightmares about it, training was hard enough without smoking as well. Then it was hard letting go of the weights, because bodybuilding is very addictive and as soon as you stop lifting you feel flat, you feel small and weak.

“So at the beginning of me starting to box I was still doing the bodybuilding style of lifting weights, I was overtraining and not getting any further with my boxing because I was still so slow and sore from my weightlifting. Then I came to a point when someone said to me what do you want to do are you a boxer or a bodybuilder, you have to make a choice you can’t do them both.

“I then just decided I would give up the weights, go cold turkey on them, and I just pushed through that mentality of feeling like the body is soft, and I started seeing real results in my boxing. I started getting a lot faster, being able to move my feet a lot more and I saw the advantages of dropping the weights.” 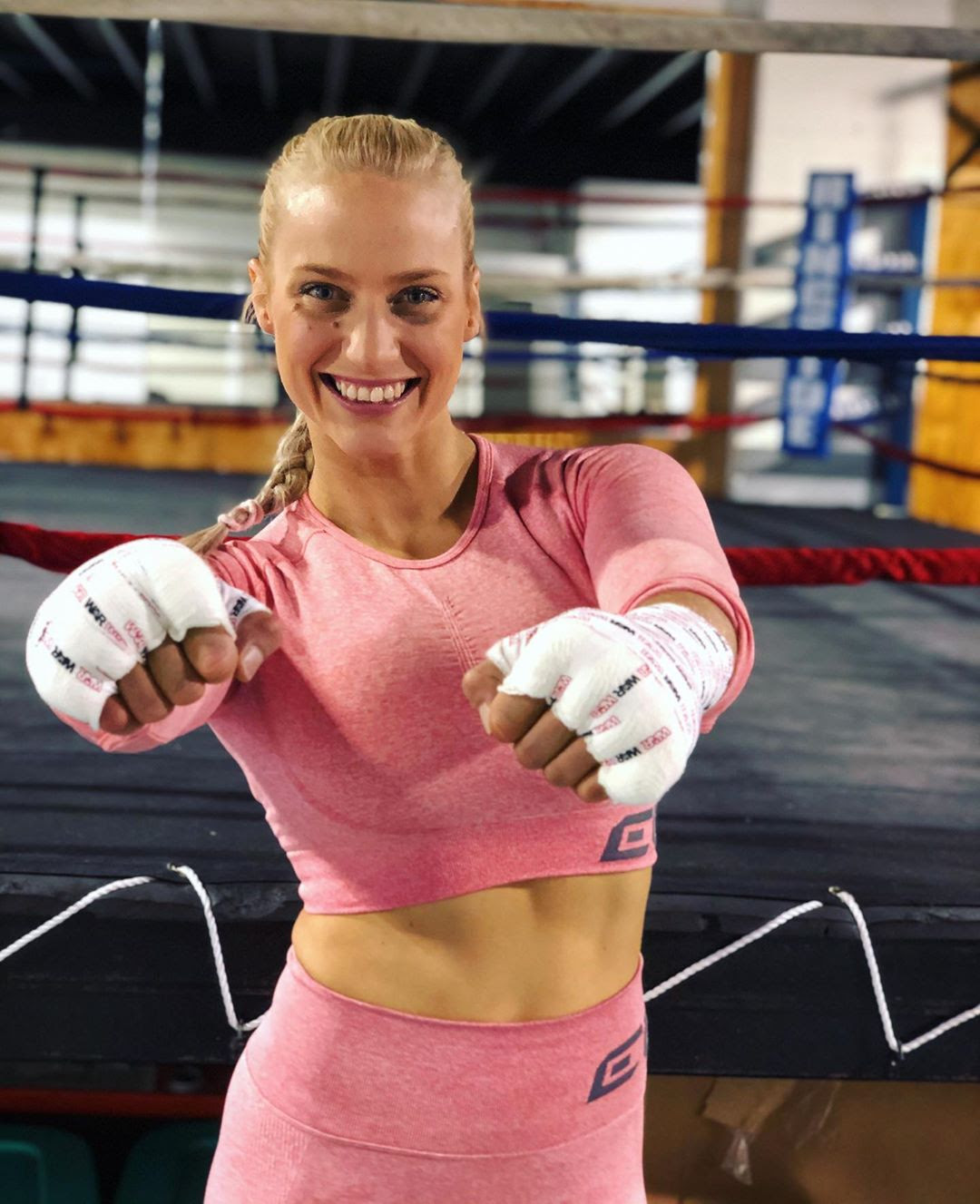 Ebanie has only been in the sport for three years. After a two-year stint in the unpaid ranks, her first amateur fight was two weeks before her 30th birthday, Ebanie turned professional in 2019. Despite being unbeaten in four fights, her debut was a painful introduction to the paid ranks. Ebanie broke her ankle inside the first 10 seconds of the fight. Despite this she not only managed to go the distance she also had her raised at the conclusion of the fight:

“If you know me, you know I don’t quit and I was never going to quit that fight, I just couldn’t do it. When it happened I didn’t realise what I had done, I got caught with a flash knockdown, and when I got back up I didn’t even know I had got hit. I just thought I had rolled my ankle and when I got back up the referee was giving me a standing eight

count. If you watch the fight you will see me arguing with the referee.

“My ankle was sore and I thought right I am having you now, I thought she has given me this knockdown, so just by going at her and focussing on my job took away the pain from my ankle. But then when I went back to my corner the first thing I said to my corner was I think I have broken my ankle. Then when I got back up I was restricted I couldn’t put any weight on it, I was like dragging it behind me when I was throwing punches. I only really felt the pain in-between rounds, in the rounds it just felt wrong. But then as soon as the fight was over I couldn’t even walk to the ring centre, the ref had to drag me over and help me to get my hand raised.”

After some time away, Ebanie was nearing a return to boxing, but that stubbornness not to quit anything led to an extended spell away:

“After six months into my rehab I got back into training and then I nearly tore my oblique right off my hip bone. So then I was out for another eight weeks. I did that in sparring and because my right foot still wasn’t right I couldn’t pivot properly, and when I threw a punch I used my entire midsection. But when it happened I kept fighting to finish the round. Although I got a very big lecture off my physio after that, he yelled at me. He said you have to understand it is risk over reward, he said it might have just been a little tear and you kept going and you kept tearing it.”

Despite boxing steadily returning over the coming months, initially, fighters may well have to be content with domestic fights because of severe travel restrictions and possible quarantine implications. Ebanie knows for the remainder of the year it will just be about improving on her current 4-0 record:

“The first thing I am going to do is get some fights over here in Australia because I don’t think there will be much international travel this year. They probably won’t improve my ranking, they are just stay busy fights. But as long as I continue to fight and building my record. I would love to come to the UK, I was planning to come to the UK in April to meet some people and see the vibe and all that. My mangers are in America and there are a lot of quality fighters over there that will help me with my ranking, and good fights too.”

Ebanie might be a relative newcomer to boxing but that isn’t restricting the size of her ambitions. Just competing for world titles isn’t enough for her: