Brian Phillips: “I Do It Because I Enjoy It.”

As Brian Phillips picked up the phone there was a faint babble in the background: his three kids, aged four, two and one, clearly overjoyed to have so much time with their father in recent weeks.

The Merseyside man, a product of Rotunda A.B.C, was keen to make the most of this unique situation and began by telling me how, despite all the worldly uncertainty, he was able to focus on the familial positives.

“The kids aren’t missing school so nothing has really stopped for the family, to be fair, they’re just seeing me a little bit more and loving it. I’m missing the gym, don’t get me wrong, but I’m not bored and I’m not by myself: I’m getting to see my kids and have some real fun with them. I’ve had time to think about the sport, as well, when you’re wrapped up in it you don’t always have time just to sit back and think.”

The 26 year old was last in action on February 29th, one of a small pocket of British boxers to have competed this year, and was slated to box in April.

Having had a fight every two months since October, each encompassing an eight week camp, timing was fortunate and Phillips has been able to relax his muscles during the lockdown. Along with those loosening limbs came time to contemplate and, unprompted, Phillips reflected on his reasons for boxing.

“There’s so many reasons why I box: to keep myself fit, healthy and strong and I do it because I enjoy it, more than anything. Everyone seems to be in the sport to please other people but I can be happy without these big platforms. Of course I would love to get a slot on a big show but when it’s right for me, not just because it’s being offered: you see guys getting offered fights on two weeks notice and they bend over backwards to get on that show and then don’t put in a good account of themselves.”

As a teen it was the individuality of the sport that initially hooked the featherweight, having enjoyed football but preferring to take sole responsibility for his success and failures. Having endured a wait for his BBBofC medical to come through it was in September 2017 that, a fresher faced, Phillips made his professional debut: on the undercard of Callum Smith vs Erik Skoglund.

“The best start I probably could have asked for. I remember thinking as a teen that I wanted to box at the Echo Arena and there were, obviously, times where I didn’t truly believe that but I stuck at it and it all panned out nicely. I’d always wanted to turn professional so I wasn’t waiting around for any particular amateur success but, to be honest, I thought you just got paid good money and had a lovely life.

“I’ve obviously learned since then that it’s not all flash cars and fancy houses but it’s a gamble worth taking. I honestly thought it was a sport based purely on ability but my eyes have been opened to how business orientated it is: even just things with ticket sales, that’s not necessarily something you know about until you’re in the game and actually trying to shift them.” 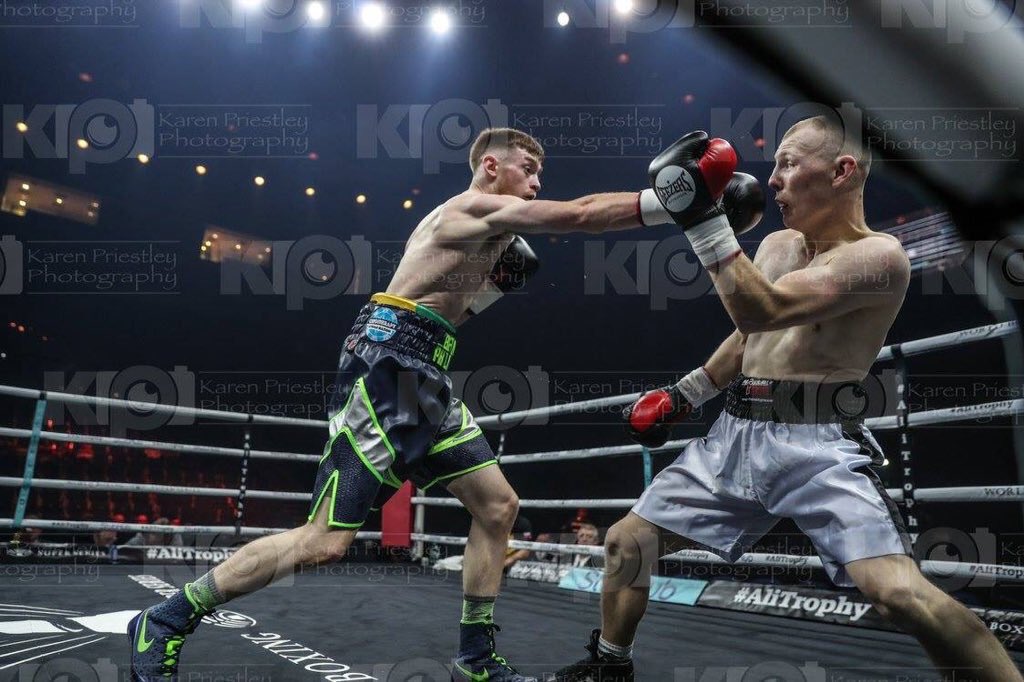 After months without a fight the fervent featherweight was keen to make up for lost time and racked up two wins within two weeks of his debut. A tougher third fight, against Simas Volosinas, kept Phillips grounded but the youngster took a significant step up in his fifth contest: an eight rounder against the unbeaten Nick Ball. Phillips’ corner threw in the towel in the second round and , despite initial despair, it is an experience looked back with a sense of gratitude.

“I was in a rush and maybe took it too early in my career. A title was meant to be on the line, a challenge belt but that got shelved, and little things kept on going wrong in the build-up. I was in a rush to go nowhere, really, through those early days of my career and that’s where I could have done with a hand over the shoulder just to say ‘slow down, you’ve got plenty of time’. That prompted joining up with Steve Wood so I’d much rather learn those lessons in the fifth fight of my career than in my 15th.”

It kept on coming back to patience. That word was repeated throughout our half hour conversation but you can tell just how much of an impact his only career loss had on him. There was a real desire to slow things down, in and outside of the ring, and really play an active part in the progression of his career.

“If anything it released a bit of pressure because I’m not unbeaten anymore and I’ve not got that ‘0’ to defend. I’ve had better opportunities after that fight, I’d say, than I had beforehand and I’ve learned patience in the fight and in the development of my career. Steve has been around and he knows this business: he’s worked with fighters from their debut all the way to world champion so he’s got a plan in place and he knows how to execute it.”

Slowing things down doesn’t automatically mean missing the boat and there has been clear guidance for Phillips in the two years since teaming up with Steve Wood. That game plan instills confidence in fighters under the VIP banner and, after nine bouts, a Central Area title shot was pencilled in for February 29th. Former super featherweight champion Zeeshan Khan was stepping down in weight for the fight and his opponent told me just how convinced of victory he was:

“I’d already beat Zeeshan in my head because for weeks before it was announced I was on the treadmill thinking ‘after this fight (against Josh Baillie) Steve is going to offer me a title shot.’ In my mind I knew it was coming and I was one up, as far as I’m concerned. He ended up being sick for the original date, February 29th, and then it’s been postponed because of the virus but it’s on for whenever we can get a date.

“I like him” the family man continued, “I really like him. He’s a sound fella but once we get in the ring it’s not about our personalities: I’ve got to go and put food on the table for his kids. As soon as it’s over we’ll shake hands, who knows, maybe grab a drink at the end of it all.”

Cautious that I had stolen half an hour away from his kids I was keen to let Brian Phillips return to the daily joys of being a father but I wanted to know, through all he’s experienced in boxing, would he go back and change any decisions he’d made?

“Not a thing. It’s been a real rollercoaster with plenty of ups and downs but it’s been a brilliant experience. You go through hard patches in the sport, as you do everyday, but they go hand in hand and teach you some really valuable lessons: if you’re not 100% mentally fit you’re not going to be able to perform on the night – those doubts will always creep up on you.”