“I remember walking into Jamie Moore’s gym the first time I was sparring with Carl Frampton, and thinking, wow, what a gym.”

This was the moment that Aqib Fiaz’s passion for boxing was reignited, leaving him now as one of the brightest prospects in British boxing.

A few months earlier, Aqib had lost interest in the amateur game and wanted to turn professional, but the transition was proving more difficult than expected:

“There was a time just before I turned pro, after my last amateur fight, when I went over to a tournament in Ireland and I boxed really well and won a gold medal. I came back and I told my brother that I just wasn’t getting a buzz anymore and that I wanted to turn pro. So, we had a chat with my trainer and I remember things were dragging out for a really long time. I was questioning whether it was even going to happen and if I could be bothered to carry on.”

“Then, luckily, we got a call to come and spar with Carl Frampton,” Aqib continued, “which was just some sort of hope and it was like a weight had been lifted off my shoulders, as I realised I wasn’t that far away and there was some light at the end of the tunnel.”

Following the sparring, Aqib asked Jamie to train him as a professional. Since then their relationship has gone from strength to strength, with Aqib citing Jamie as his biggest influence in boxing:

“He’s had a massive influence on me. Even today, he just sent me a text saying he’d watched one of my fights back and he told me that I’d been doing everything he’d asked but there were various things we needed to work on. He’s just always thinking in terms of boxing and ways to improve.

“I remember the first ever time I went on the pads with Jamie and I felt like a complete novice, even though I’d had over seventy amateur fights and I thought I was a good boxer. But, on the pads with him the first time I realised there were better ways to do things and he made me want to learn and I just wanted to be in the gym every single day. He’s just a great teacher and he keeps his gym fun as well. I don’t think you’ll speak to anyone that would say there was a bad atmosphere in the gym. In most boxing gyms there’s a bit of animosity, but it’s nothing like that in our gym, it’s all fun and games, along with loads of hard work as well. It’s just one of those places you want to go back to.

Aqib is also taking full advantage of the opportunity to train with the more experienced and accomplished fighters in Jamie Moore’s gym, notably Carl Frampton:₩

“In the gym we’ve got Carl, Rocky Fielding, Jack Catterall, Martin Murray and Tommy Coyle was there when I first went into the gym. You can’t stop learning from guys like them, because they are all so experienced in different ways. Carl especially, because he’s been one of my biggest inspirations over the last year. We’ve spent camps away together in Philadelphia and Vegas, so I’ve just seen the way he goes about things and the way he structures his camps is great, so hopefully when I get to that level, I can do the same.”

While Aqib clearly holds Carl in high regard, the admiration is mutual, as Carl has often spoken highly of Aqib’s potential in the sport:

“To hear him talk highly of me is great,” Aqib admitted, “because it’s not just one of those things that anyone can say they’ve had. But I don’t let it get to my head, because at the end of the day it’s just stories and it doesn’t mean anything until I prove it in the ring.”

Since joining Jamie Moore’s gym, Aqib’s professional career has got off to a good start, winning his first five bouts. It was also recently announced that Aqib had signed with globally renowned promotional company, Matchroom Sport, a moment that Aqib considers to be a career highlight:

“I know it’s not exactly a career highlight in the ring, but for me it is because growing up I always watched the Sky shows and thought, ‘will I ever be good enough for that?’ Now I’ve got it, I’ve signed a deal with Matchroom and I can’t even tell you how happy I am. Through this lockdown that’s why I’ve been so dedicated and I’ve been training day in day out and dieting well. I feel like it’s my time now and I’m just over the moon to be signed to such a big promotional company.”

Aqib also believes Matchroom is the perfect place for him to be able to achieve his lofty ambitions in the sport, as he declared:

“I want to be a world champion and I want to win multiple titles and in different weight classes. That’s the sort of ambition I have and I wouldn’t be in the sport if I didn’t. If you put everything aside in terms of boxing skill, my dedication is what I think will get me there. I’m that dedicated and focused that I won’t let anything get in my way. That’s the way I’ve always been, ever since I was a young boy first going into a boxing gym, I’ve always been focused and I don’t think there’s anyone else as dedicated as me.”

Aqib first walked into a boxing gym when he was just eight years old, after his dad took him because he was getting into fights at school, as he revealed:

“I was very overweight when I was a kid, so I would always get picked on by older kids and I would get into fights. I remember one fight I had with this kid in school and I knocked his tooth out. So, my dad took me down to Northside ABC, in Clayton, which is about a half an hour drive from my house. The rest is history, and for the next ten years we were just doing that drive, because I fell in love with boxing straight away.”

Being from Oldham, Aqib amassed a substantial fanbase from an early age:

“Even from the age of 15, 16 I’ve had a really good, solid fanbase.” Aqib said, “I wouldn’t even call them fans, they’re pretty much like my family, all of them. They all come and support me and not just in buying tickets, they’re always supporting me and sending me nice messages, so I’m really thankful for it. As you know, in pro boxing it’s part of the business, so if you’re not selling tickets, you’re not even looked at, you’re just pushed to the side. So, I’m very lucky, and blessed to be in the position where I have a great fanbase.”

As well as boxing, Aqib is going into his third year at Manchester University, studying sports science, although he admitted it’s mostly to keep his mum satisfied:

“I was always bright enough to stay in education. My mum always said I needed to be educated, because even though I’m boxing you never know what might happen. So, to be honest it was mainly just to make my mum happy, because she wanted me to do it. Boxing’s going well now, so hopefully I won’t need a plan B, but we’ll just have to see.”

Aqib had a successful amateur career, winning nine area titles and a national youth title, as well as boxing for England a number of times.

More recently, Aqib has made the transition from amateur to the professional ranks comfortably, owing to his style:

“It’s only been a year, but I feel like I’m getting a lot better.” Aqib said, “I always felt like I had a come forward, aggressive, pro-style. As I go through the levels and start fighting more rounds, I feel like that will help me, especially the body punching, because I feel like good body punching starts to take effect over the later rounds. I’m understanding boxing better and boxing more with my brain than I used to. It used to just be fast paced and I’d just fight in the amateurs. Whereas now you have to think more, and Jamie’s really good, because he teaches me how to deliver each shot and think about certain things, like positioning.”

Aqib’s relationship with God and his religion has also helped guide him through his professional career to date, especially before fights on the big stage, such as his last outing at the Manchester arena on the undercard of Scott Quigg vs Jono Carroll:

“My belief and faith in god is very strong.” Aqib acknowledged, “I get the same good feeling when I pray as when I exercise. Before fights things can be a bit hectic and all over the place, and your mind can play tricks on you, but when I sit down and pray and speak to god, I feel so much calmer. I know mental health is a massive part of boxing as well as the physical aspects, and I feel like praying and speaking to god is a huge thing for me.”

Aqib has adjusted so well to the pro game that he believes he will soon be ready to mix it with the best in Britain in his weight division:

“I spar with people like Carl Frampton and Zelfa Barrett, who’s another top super featherweight, and I feel like I fit nicely up there with them and I mix it well. I believe in myself.”

Aqib was one of the lucky few who managed to get a fight in this year before the coronavirus struck, but he was also scheduled to be fighting again in April, which has since been cancelled:

“I was supposed to be fighting on the 18th of April in Oldham on a Steve Wood card, just to stay busy really and get another fight in before Ramadan. So, I was hoping to have a busy year, but all those plans are cancelled now. It was frustrating, but if you let it frustrate you too much then you can fall behind and it’s no good for anyone. I try to look at the positives, like that fact that I’ve had a fight this year at least, and some people haven’t even had that.” 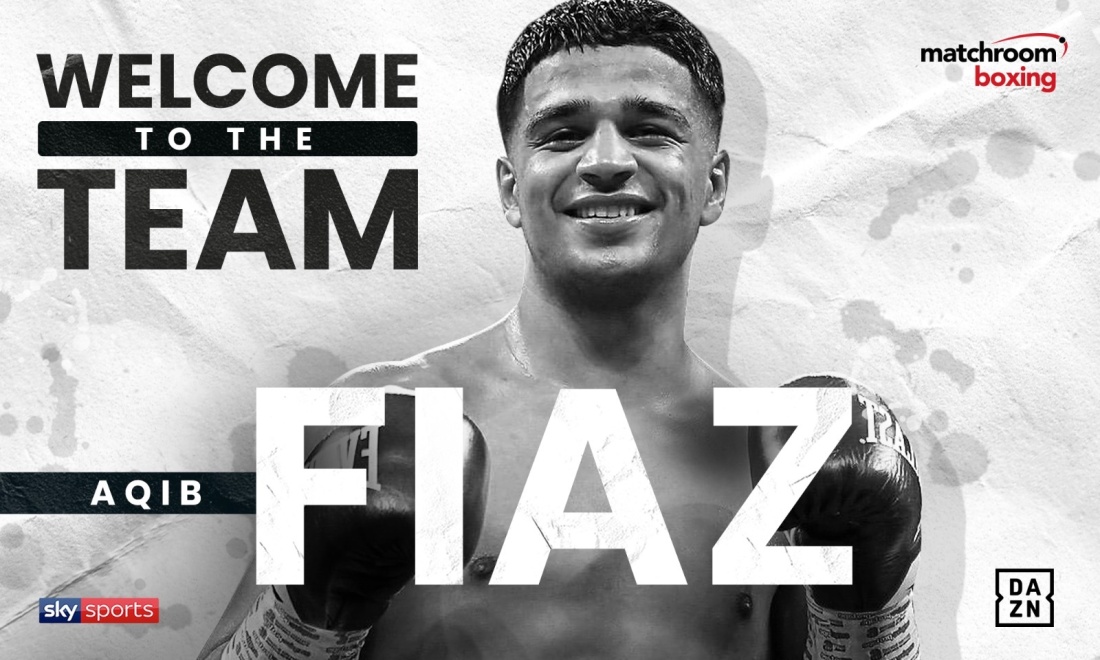 In terms of the future, Aqib hopes that now, with the backing of Matchroom, he can hit the ground running when boxing returns:

“The plan is to keep me as busy as possible, and now that we’ve got the platform with Matchroom I think performances are going to get better and better. I think I’ll shine on the bigger stages as well and that’s when the best of me will come out.”