An Interview With Francy Luzoho

Returning to the ring after your first defeat can be a harrowing experience, do you still have the confidence in your head that you can still beat anyone in front of you?

This will be the question on Francy Luzoho’s mind on Saturday 1st February when he enters the ring following a defeat in only his 2nd fight in March last year.

But having spoke to him on the phone in what he felt was a very bad decision against Martin Quinn in my mind these doubts have already left him, confident but not cocky that he can still get to world level and become Ireland’s first black world champion.

Born in DR Congo but raised in Ireland he has fought through many adversities in life growing up in first in Galway and then relocating to Dublin.

Boxing wasn’t even his first sport, it was only a quad injury as a footballer that lead to him needing to rest up for a while:

‘I was watching football videos on YouTube to try and improve myself and stumbled across Roy Jones Jr in one of his fights where he had his hands behind his back and did like a chicken dance slipped two punches then came back with a right hook and knocked the guy out (Glen Kelly in 2002), then seeing that aged like 17-18 you know I was shocked and that’s what made me join the sport.’

Going on to have a good national level career as an amateur but never quite hitting the pinacle of the unpaid side of the sport in winning 3 novice titles and a Celtic box title in under 30 bouts the potential has always been there to make a name for himself.
We spoke about many things within boxing, take a read below:

What team do you have around you and where are you based?

‘I am based now officially in Lanzarote, I moved out here and been here for almost 5 or 6 months now. My trainer is Jonathan O’Brien and I train out of Champions Gym alongside my training partners Slainie Nolan, Paulie McCullagh and Seano McCullagh these are the lads I am training next to in the Champions Gym. I do all my camps and everything out here in Lanzarote. Sparring and everything.’

What do you do outside of boxing?

‘After this fight I am going to be taking a week off and have some downtime and do a bit of jetski and explore the island a bit more ya know. When I am not training or not getting ready for fights I like to just sit at home and sleep and stuff my face full of food haha that is how my day goes really outside of boxing.’

After your fight what is going to be that first bit of food you devour then?

‘My first thing I will have well there is two things I love in this world junk food wise and that is Dominoes pizza or a McDonalds hamburger so will probably have to rock, paper or scissors with myself between the two but I will probably just the get two anyways. But my go to go to is definitely Dominoes pizza, bbq base loads of chicken, loads of meat on it with chicken wings on the side and cheesy garlic bread with bbq sauce and garlic sauce on the side and that is me happy do you know what I mean.’

What style of fighter would you say you are?

‘I am both a switch hitter and pack a punch in my two hands you know, I can brawl and do love to brawl sometimes. I can box, but all in all I would say mainly I am a switch hitter yeah.’

Who was your boxing idol, a fighter you could sit and watch over and over?

‘It would be between three people for me, Roy Jones Jr, Floyd Mayweather and Muhammad Ali. Those are three I could watcher over and over without a doubt the best in the world like.’

So if you could take one bit from each of those three fighters to make one fighter what would you pick?

‘From Jones Jr I would take his reflexes with his awkwardness how he comes from each angles, Mayweather I would take his jab to the body jab to the head he had the best jab in the game, and then Muhammad Ali his footwork was just amazing but then also have to have his head movement as well.’

Being born in DR Congo and being raised in Ireland where would your dream venue be to fight?

What so far in amateur or professional boxing has been your best moment?

‘My best moment is when I was an amateur and winning the Celtic box cup and facing three lads to win it and was my first major competition for me and winning that was the best feeling in the world for me so far ya know.’

As always I like to let a boxer shoutout to anyone who has helped them on their journey because where would they be without these people? Francy would like to give a big shoutout to his main sponsor Aquadreams Spas and Pools and their director Mark Hayes, his head trainer Jonathan O’Brien, Williams owner of the Champions Gym,  sponsor Willie O’brien, sponsor Marc Sheppard, his sparring partner Slanie Nolan and his manager Ryan Rhodes, Paul McCullagh and Shaun McCullagh my team mates, the Champs chief/cook Emma Prendergest, and lastly but not least his partner Jade Hayes his rock and shield as he describes her. 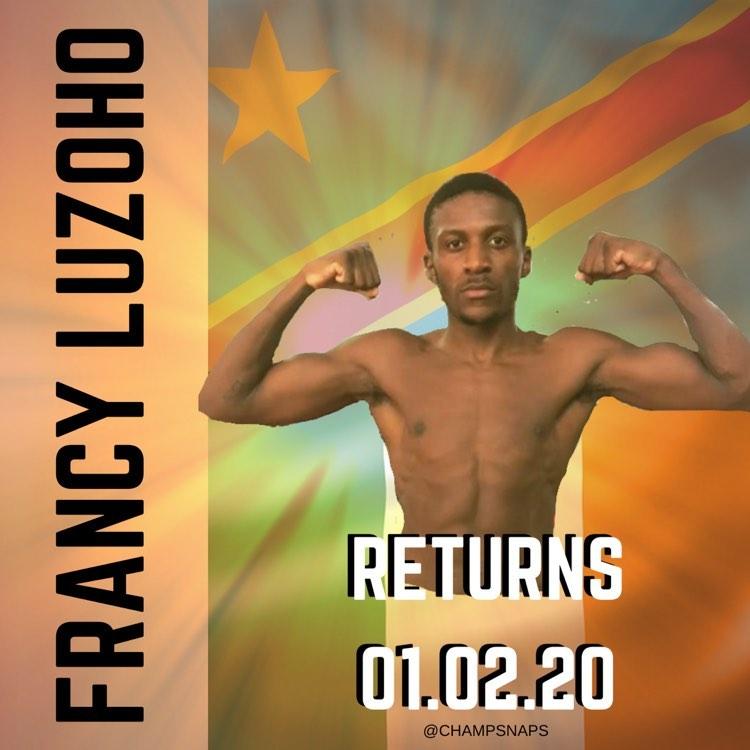 Francy is next out Saturday 1st February at the Devenish Complex, Belfast on the undercard of Eric Donovan’s 12th fight.