Looking to add another knock out to his record having scored 2 in his last 3 fights.

The Saint Lucia native is really starting to find his feet in the pro ranks after having a bit of a stop start career so far and really wants to push on for titles come 2020 so wants to end 2019 with a bang.

All you need to do is a little research on Ryan to find he isn’t just some white collar fighter wanting to give the pro ranks a try, he is a well schooled amateur who appeared at the 2012 Olympic qualifiers, the 2013 World championships and the 2014 Commonwealth games representing his birth isle Saint Lucia.

We had a chat about his love of boxing and what he hopes to achieve so have a read below:

So what is your background within the boxing world Ryan?

‘I started properly training when I was about 17-18, I went to Islington but this was just like at the time I planned on it being just a hobby, I was on and off for a little bit then when I turned about 20 that is when I started to take it seriously.

‘I then got carded and started having bouts, in the amateurs in total I had about 35 bouts and within that time I represented Saint Lucia and boxed in competions like 2012 Olympic qualifiers and boxed against Michael Hunter, I boxed in the 2013 World championships and 2014 Commonwealth games.

‘Then in loads of international tournaments all around the world. My amateur career finished in 2014 and I had a year out where i was still training but deciding what I wanted to do, I decided I wanted to turn pro. I turned pro in 2016 but did’t have my debut until April 2018.’

Was there any particular reason it took so long from turning pro in 2016 to making your debut in 2018?

‘It was really a few cancelled fights, bad timing and stuff but by 2018 I had everything settled and ready to go. There is no point rushing things if everything is not properly in place. I think it happened for a reason, since I made my debut it has all been going well 7 fights and 7 wins. I am on a bit of a roll right now with 2 knock outs in my last 3 fights. So it is all going well for me right now.’

What team have you got behind you?

‘I am part of a stable with a trainer called Mickey Burke. He trains quite a few other good pros like Ellis Zorro, Jonathan Palata, Billy Underwood, Boy Jones Jr. There is a few of us around the same weight as well so there is loads of sparring.

‘There is about 6 of us all over or around 90kg to spar. It is really good. We mix it about all the time so not sparring same person too much. Then I have a really good strength and conditioning coach called Ben Lewis, he is really good and he also trains John Harding Jr.

‘He knows his stuff and since I have been working with him I am so much stronger and fitter, better balance better stability. I also have Colin Middlemas of MVN Management who does my PR for me. I speak to him all the time. I have got a good team around me. I couldn’t ask for better preparation really and I just want to keep training hard and pushing on.’

What would you say your ideal fighting weight is because I know you have fluctuated a little with this?

‘Ideally and throughout the amateurs I was mainly under 91kg which is classed as cruiserweight in the pros, I did go down to light heavy in the Commonwealth games but I don’t know if I could get there anymore. At the moment I am fighting at heavyweight but I know it is not my natural weight, so the aim is to gradually come down so by about February or March next year I am looking to make cruiserweight comfortably.’ 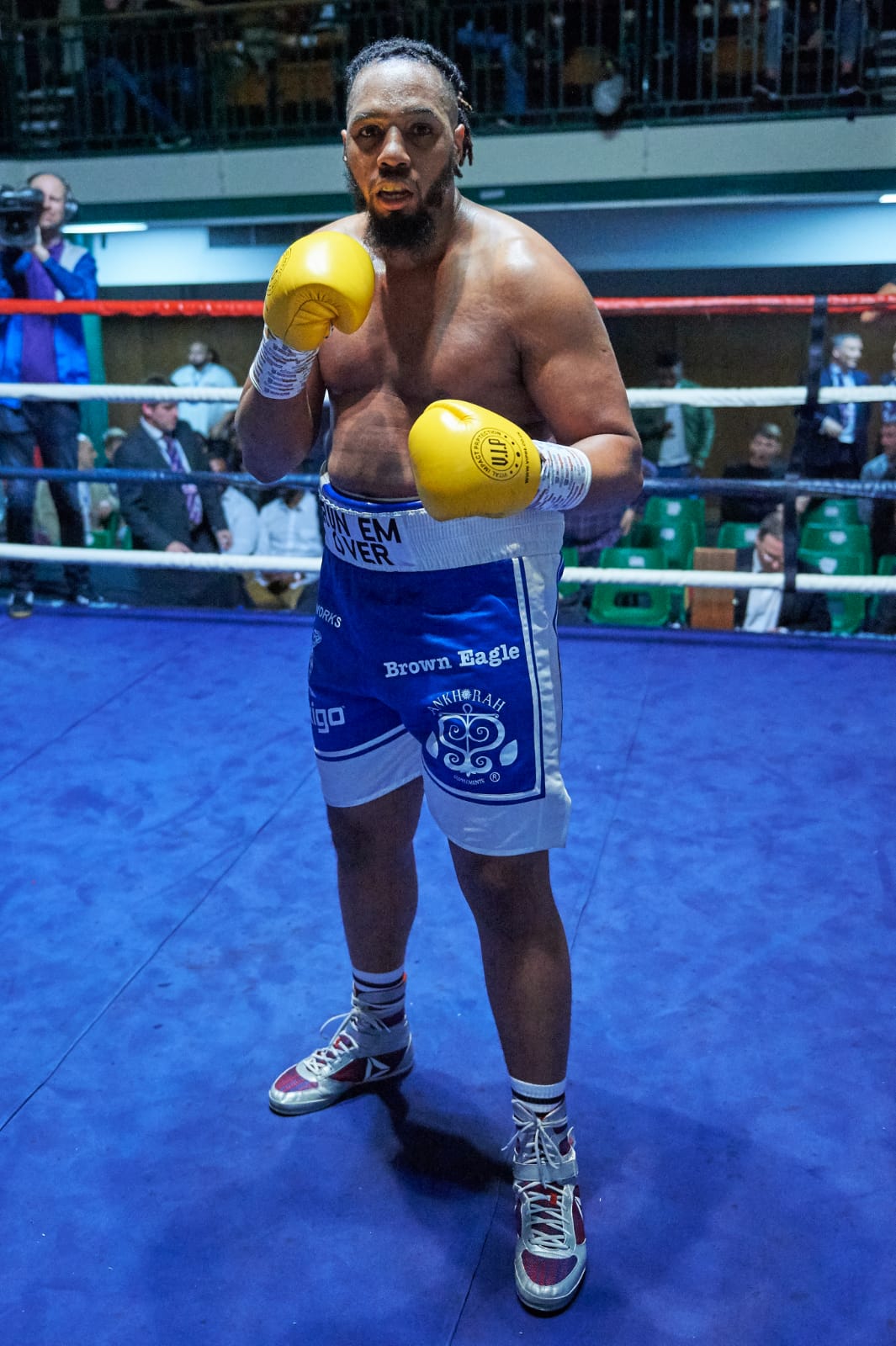 What do you do outside of boxing?

‘I do a little bit of personal training on the side but I am pretty much a full time pro. Up until August I was working in a warehouse but the hours where too much wth my training as well so I had to pack that in and just focus on training. Outside of boxing I really don’t do much at all.’

What has been your best moment in boxing so far?

‘There is many good ones but my pro debut, because it took so long to get everything in place and it got delayed so many times so when I finally got in there and got the win. It may not have been my best performance but it just felt so good afterwards getting that win on the record and starting my journey in the pros.’

‘So to be fair I am looking at titles, I have had 7 fights now and this being my 8th so I want to push on towards titles. There was talk of me boxing for the vacant Southern Area title on this coming show but it never got finalised.

‘Also next year you know like I said I used to box for Saint Lucia as an amateur and now pros can enter Olympics and World champs in the amateurs I am going to be representing Saint Lucia again. So I have to go to the qualifiers in March in Argentina. I will have another pro fight February then box in them. Fight as a pro in April-May then the games are in July in Tokyo. That is the focus for the first half of the year.’

What style of fighter would you say you are?

‘I am more a boxer than a slugger or brawler, I can slug and brawl but I like to to box behind my jab and keep it long. I think I am quite skillful as well, I wouldnt say I am a one punch knock out artist but I have got power as well. I kind of base myself a bit on Lennox Lewis, I love his style. I get stopped at least 3 or 4 times a month and people say I look like him ha ha.’

Who was your idol growing up in the boxing world?

‘I used to as you can tell watch a lot of Lennox Lewis, I watched a lot of Prince Naz bit of Mike Tyson. But for me my all time favourite was Muhammed Ali he is the guy, even when died I was so hurt I actually went to Louisville, Kentucky to try see the funeral. I went on my own, I didn’t manage to get to the funeral but I paid my respect to him in his home town.’

Once again to highlight just what a great job sponsors do in helping fighters manage to have some of the financial burden taken from them Ryan would like to give a shoutout to St Lucian Tourist Board, Brown Eagle restaurant and Liberty Supplements for doing what they are doing in helping him try to achieve his boxing dream.