With less than two weeks to go until Bellator MMA makes its highly anticipated return to Dublin on Friday, September 27 at the 3Arena, the fight card, which is stacked from top to bottom, is shaping up to be one of the most exciting nights in recent Bellator history.

The event will be dual broadcast and will be shared by Channel 5 and Sky Sports in the UK, Virgin Media Television in Ireland and Paramount Network in the US.

Bellator Dublin: Gallagher vs. Ellenor will air LIVE at 10 p.m. BST on Channel 5 in the UK and on Virgin Media Television in Ireland. Bellator Dublin is a Bellator European Series event featuring Irish sensation James Gallagher (9-1) who will be looking to remain unbeaten on home soil against Cal Ellenor (8-2) in a bantamweight main event. Also featuring on the three-bout card is a welterweight grudge match between British MMA star Michael “Venom” Page (14-1) and Ireland’s own Richard Kiely (3-1), as well as a lightweight bout between Ryan Scope (11-2) and SBG’s Peter Queally (11-5-1). 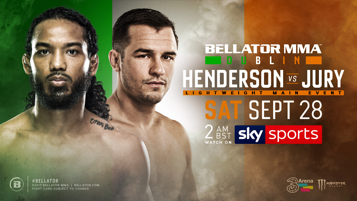 Bellator 227: Henderson vs. Jury will air on Paramount Network in the US from 9 p.m. ET and on Sky Sports in the UK and Ireland at 2 a.m. BST. The five-fight card features the promotional debut of 12-fight UFC veteran Myles Jury (17-4) who takes on former multi-time world champion Benson Henderson (27-8) in a lightweight clash.

The event will also feature a number of marquee preliminary bouts, which will be available to watch live and free globally on the Bellator Mobile App beginning at 4:45 p.m. BST.

The full Bellator Dublin: Gallagher vs. Ellenor and Bellator 227: Henderson vs. Jury updated bout cards are listed below.

Updated Preliminary Card Live and free on the Bellator app from 4.45 p.m. BST: