The Lafayette native is conceivably Nurmagomedov’s most dangerous challenge to date after twenty-seven opponents fell to the waste-side when paired with the Dagestan native.

Khabib’s level of grappling is undeniably on a completely different spectrum when compared to his lightweight counterparts, who so far, have been outmatched on every single occasion.

It’s a traditional Dagestani technique of Sambo or combat Sambo, but Nurmagomedov presents the best overall utilization of this discipline the Octagon’s ever seen. The use of high crotch and low dive variations of the single leg takedown, as well as bodylock attempts and trips both inside and outside, make Nurmagomedov one of the most technically complete and varied grapplers we’ve seen.

The 30-year-old’s ability to make each and every one of his opponents so far, play his game come fight night is shocking. The threat of the takedown is constant and the success is inevitable. A much improved striking base under the tutelage of Javier Mendes at American Kickboxing Academy has only served to further round Nurmagomedov’s offensive weaponry.

Offensive output from the top is most definitely Khabib’s most dangerous tool. The sheer audible thud from his ground and pound assaults are nothing short of frightening, case in point, his demolishing of Michael Johnson, Edson Barboza and recent UFC 229 stoppage of Conor McGregor.

As I mentioned in my Dustin Poirier Fighter Profile feature yesterday, the takedown on Saturday night is inevitable, it now comes down to where Poirier can score some point whilst on his back.

I’m calling this portion of the breakdown, ‘the wrestling factor’ but it’s so much more detailed than just standard ‘wrestling’. In just Khabib’s fourth Octagon walk he met with four-time NAIA All-American wrestler Abel Trujillo.

Over three rounds, Nurmagomedov displayed the gargantuan gulf in class and wrestling ability between himself and the North Carolina native. Setting the record for most takedowns in a fight with twenty-one successful shots from twenty-seven attempts, Nurmagomedov had Trujillo on his back more often than not. A real stand out image from that 2013 clash is Trujillo waving his arms during another takedown for Khabib, almost signaling that there was nothing more he could do to defend.

In his UFC 205 matchup with Michael Johnson, Khabib’s wrestling prowess was evident once again. Despite winging Nurmagomedov with an early hook and somewhat stumbling the Dagestani, Johnson was unable to capitalize as he suffered two debilitating takedowns. Our first real example of Khabib’s scary power from top mount was showcased in New York that November.

The power Nurmagomedov can generate and the explosive nature of the strikes eventually set up a third-round Kimura, with Johnson verbally urged to tap by Nurmagomedov to save breaking his right arm.

Brazilian kicking ace and UFC 242 co-headliner Edson Barboza was on hand next to experience Nurmagomedov’s grappling expertise. Barboza had worked his way into a title eliminator with Khabib off the back of three impressive victories but after fifteen gruelly minutes, Barboza looked as if he had seen a ghost. Khabib almost leaped into clinch range with Barboza on multiple occasions, literally throwing caution to the wind.

With four takedowns, Khabib had proved Barboza could be taken down on cue, despite the Brazilian’s hugely impressive defensive wrestling work. With his patented triangulation of the legs, Khabib was almost serpent-like as he wrapped the Brazilian up and began his vicious striking onslaught to take a dominant, one-sided unanimous decision, scoring an incredible 30-24 on judge Glenn Throwbridge’s scorecard.

We’re all too familiar with the ugly build-up and aftermath to Khabib vs. McGregor at UFC 229 last October, but as advertised and promised by the AKA staple, he did, in fact, do his talking in the Octagon.

His first title defense since his vacant championship victory over short-notice replacement Al Iaquinta proved to be his most impressive and well-rounded display so far, against arguably his most deadly opposition.

Within the opening twenty seconds, Khabib had shot for a takedown, from the center of the Octagon in fact. Diving for the right leg of McGregor, the Dubliner initially defended admirably, displaying great balance before Khabib transitioned to a double leg. 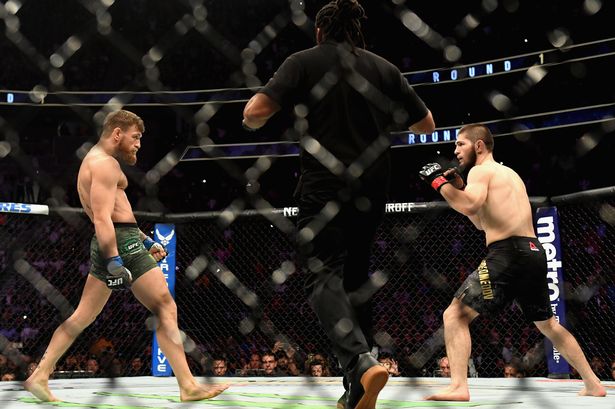 Utilizing the leg triangle once more, Khabib moved to half guard at the fence with McGregor pinned. The opening round proved smothering for McGregor, as Nurmagomedov dug his head beneath McGregor’s chin and looked to posture. The second round offered something quite surprising on the feet. With the constant threat of the takedown, like many wrestlers, their striking ability is usually forgotten about.

Feinting with a second low single dive, Khabib launched a massive looping right hand which dropped McGregor who scrambled back to the fence and recovered. Khabib had McGregor’s attention now not only in any wrestling predicaments but also in the standup affairs.

Khabib may not always prove successful with his initial shot, but it’s the follow-up attempt or transition which usually results in triumph. Once more attempting a double leg, Khabib then switched to a high crotch single, elevating McGregor before dumping him.

Mounting almost immediately after triangulating the legs of course, Khabib was scuttled back to full guard. “Let’s talk now.” Khabib began verbally jabbing with McGregor before stacking the Dubliner from guard. With punishing shot after shot landing, color commentator Dominick Cruz bizarrely suggested that McGregor was simply trying to “gas” Khabib out while taking brutal punishment, a truely ignorant claim.

Showcasing his improved boxing in the third round similar to the aforementioned Iaquinta bout, Khabib shot with no success on two occasions as he elected to trade with McGregor in the pocket, albeit facing labored and long shots from the former two-weight world champion. A late trip once more with McGregor’s back to the fence scored Khabib another takedown just before the buzzer. Herb Dean separated both men as McGregor, told, “it’s only business” to which Khabib echoed, “hey, let’s talk now”.

A lethargic McGregor was once again tripped by the fence as Khabib began to look for back mount in the fourth round. Establishing hooks after a failed scramble from ‘The Notorious’ one, Khabib moved his way to the fence and opted for a neck crank submission, forcing the tap to retain his gold.

It’s almost a given tomorrow evening that Dustin Poirier is well better conditioned than the aforementioned McGregor. We’ve seen Poirier pushed to his cardio limits against both Justin Gaethje and the pressuring Max Holloway, tests he passed with flying colors.

The predominantly boxing based fighter must now take takedown attempts into account. Poirier has a Brazilian Jiu-Jitsu black belt to fall back on, but usually utilizes it from the top, an unlikely position to find yourself in when pitted with Nurmagomedov. Khabib, who’s preferred method of clinch work comes against the fence, must be cautious of level-changing and head position as we’ve witnessed Poirier attempt to pull guard for a guillotine twice in similar positions in his rematch with Eddie Alvarez.

The consensus suggests that Khabib holds the disadvantage in terms of polished and technical striking compared to Poirier, who arguably strikes quite narrowly with hooks, and notably comes rather alarmingly ‘square’ after exchanges offering up the takedown.

Poirier traded leg kicks with Gaethje during the early going of their five-round clash, an interesting prospect to take into consideration due to Khabib’s heavy front leg bias.