Unbeaten (6-0) middleweight prospect Brad Rea inked a professional contract halfway through last year with intentions of being in the sport for a considerable period of time.

The highly experienced amateur, with over 100 bouts, made his professional debut at the tender age of 20 with a brimming smile and a head full of content. In the 12 months since, having debuted last September, Rea has relished every twist and turn presented to him.

“I’m loving it, I’m progressing at a good rate – faster than I expected – but I just want to box as often as I can, test myself with different styles of opponent as regularly as possible. I am young, that’s a fact, and I’ve got time on my side so when I speak with Blain (Younis, Rea’s coach) we agree that I should have a variety of opponents so I learn as much as I can. I’m hoping to keep that up for another year and get to 12-0 before really getting involved in some serious challenges.”

Fighting every two months is a relative walk in the park for the former Junior ABA champion who would regular find himself fighting three times over a weekend as an amateur. Since signing with Steve Wood he has gone four rounds on four occasions before stopping his latest two opponents, when scheduled for six. For the Stretford fighter that’s a sign he’s grown into his ‘man strength’ quicker than expected.

“I’ve always said as the rounds go on that I think I’ll be more likely to get the stoppages and I can feel that in my reactions and in how light I’ve got on my feet. I can really see the difference (from his debut); when I look back at my second fight I look like a boy, but now I’m maturing, I’m hitting hard and I look stronger. For my first fight this year (in March) I was feeling really relaxed and telling everyone what I was going to do and the differences they would see. I ended up boxing Victor Edagha – as you know there’s not much you can do with him so I was disappointed I couldn’t go and gloat afterwards. In my last two fights I’ve got stoppages against a guy who hadn’t been stopped (Genadij Krajevskij) and then Alistair Warren who’s a fair lump.”

The “fair lump” of Alistair Warren provided Rea’s latest challenge, in late July, but the contest proved to be a breeze; indeed, the least problematic of his career. A one round stoppage over the, usually, durable away fighter lays down an early marker for fellow middleweight prospects but Blain Younis’ charge told me it didn’t come as a complete surprise to the team around him.

“We had spoke about it (the possibility of a stoppage) and I did think I was capable of getting him out there, 100%. Did I think it was going to and blast him out in the first round? Definitely not because I know Warren comes to fight, he gives everyone a test and he takes rounds of people and if you’re not on your day he will beat you. I think because he does come to fight, though, there’s more openings to try and target and that’s why I had confidence I could stop him – I knew I had the power and there’s always the possibility it happens in the first round but I’d be lying if I said I expected it to be that quick.”

The 116 seconds it took to record the stoppage is hard to fault with Rea dropping his counterpart on three occasions; one further trip to the canvas was ruled a slip. Each time Warren hit the deck it was on account of a body shot and there was no luck nor coincidence in regards to that but, rather, an expertly conjured up gameplan.

“Look at his Boxrec”, Rea explained, “he gets dropped by shots to the body so we knew what we had to do; Get on the jab, move your feet, smash into the body early on to try and get his guard down and then try and get him out of there later on. Obviously the smashing to the body plan worked and it slowed him down, it really did. When I put him down with he first shot I looked to the corner and Blain was telling me to take my time and not to rush, and I really didn’t want to go in and throw a thousand punches – I wanted to look good doing it, and I think I did. I think I took my time, didn’t looked rushed, so I’m happy with it and it’s a statement, especially at my age.”

The next step for the 21 year old is, predictably, two months after his last bout and it’s an opportunity to make up for his own personal disappointment from his previous visit to Bolton – that dastardly frustrating fight against Victor Edagha. An unknown opponent over another six rounder bodes well for the development of Rea, who hopes to go the rounds this time, and he’s got a clear plan for the aftermath.

“(On) September 28th I’m due to be out in Bolton and then the plan is to squeeze in another six rounder before the end of the year. If the opportunities came up I’d love to be in a longer fight, eight rounds, but I wouldn’t want it to be a repetitive eight rounds. There was the area title fight (Jack Kilgannon vs John Telford) on the same night as my last fight and I’d feel comfortable at that level. I know Jack well, I’ve sparred with him so I wouldn’t call that fight out and say I want to fight Jack but I feel as though I’m at that level. I don’t see him hanging around for too long at that level so then, hopefully, I’ll be able to approach that title.”

Kilgannon, as Rea alludes to, is a familiar face in the mddleweight’s camp with countless rounds of sparring between the two. Rea has mixed it with seasoned professional behind the doors of the gym – Liam Smith and Mark Heffron two notable names – but actually it’s his experience with Jack Cullen, Little Lever’s Meat Clever, that has been most helpful in his progression. 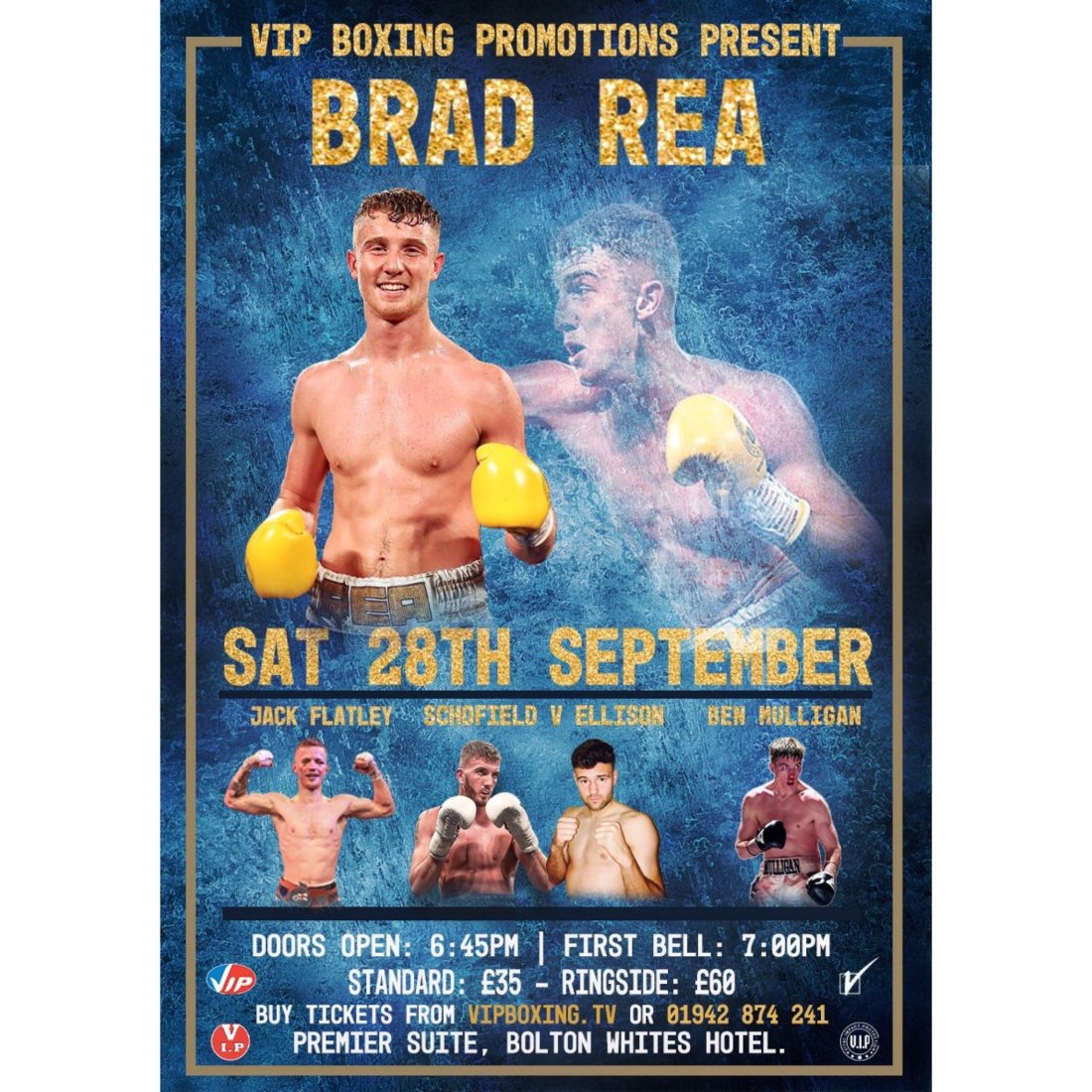 “I’ve sparred him since I turned professional and the difference from then to now is massive and we’re always having competitive spars. There’s not many lads at middleweight taller than me but he’s one of them and it can’t be long before he gets picked up by one of the big promoters. Because I have sparred with him for so long there’s a really easy comparison; it’s one thing hitting pads and thinking ‘I’m doing better’ or ‘I think I’ve improved’ but you when you can see a genuine difference in the quality of spars that’s when you’re in doubt that things are working.”

The first year of professional life has provided an invaluable set of foundations for the young Lancashire middleweight; from the frustrations of dreich and drab opponents to the buzz of statement knockout. A hard 12 months to top but, if Rea can help it, he’ll do just that – and maybe he’ll even get round to watching The Greatest Showman, as he perennially promises to do so.

“I can’t complain because I’m doing what I love – day in, day out – and I’m just looking forward to what’s coming in the future. In six months time I will definitely be ready for a title and I want to fight guys with winning records, I’d do that in my next fight, get me some undefeated prospects and it doesn’t matter if it’s six rounds, eight rounds, a title or an eliminator, I want to be in those fights. People who really come in to try and beat me, to try and take my head off, that’s what I want because that’s when I’ll show what I can do.”